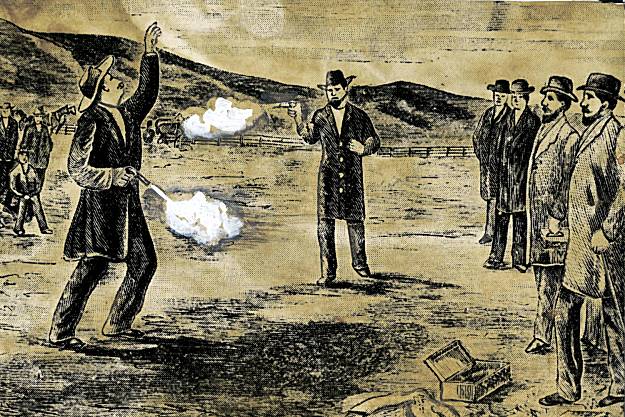 In Fyodor Dostoevsky’s novel The Brothers Karamazov, the youngest brother, Alexey, is a novice in the local monastery serving as an aid to the revered monk, Father Zossima. From his long hours attending Father Zossima, Alexey compiles notes of the saint’s reflections and life story. Before becoming a monk, Zossima served as an officer in the army and it was during this part of his life that he was converted.

A young man having come into his inheritance, Zossima was vain and arrogant, even though he was raised in a god-fearing home. Like all officers in the army, Zossima had an orderly who attended him. He regularly abused his orderly, but the night before going to a duel he had instigated he beat him mercilessly. The next day, Zossima woke up early in a pensive mood. Looking out the window of his room he was struck by the beauty and tranquility of the morning. He sensed a disturbance within himself that led to a series of questions.

He began trying to discern why his heart was so provoked. Was it a fear of death or the vileness of shedding blood? No, that wasn’t it. He continued to listen to his heart until he came to the conclusion that it was the mistreatment of his orderly that was disturbing him. Faced with the beauty of creation and the ugliness of his behavior his conscience generated a tension in his soul that finally broke through his hardness. Dostoevsky writes:

“It all rose before my mind, it all was as it were repeated over again; he stood before me and I was beating him straight on the face and he was holding his arms stiffly down, his head erect, his eyes fixed upon me as though on parade. He staggered at every blow and did not even dare to raise his hands to protect himself. That is what a man has been brought to, and that was a man beating a fellow creature! What a crime! It was as though a sharp dagger had pierced me right through. I stood as if I were struck dumb, while the sun was shining, the leaves were rejoicing and the birds were trilling the praise of God. . . . I hid my face in my hands, fell on my bed and broke into a storm of tears.”

Dostoevsky is an astute observer of human nature and a master of character development. He captures the workings of conscience beautifully in his novels. In the case of Father Zossima we see the familiar pattern of tension and release common in human experience. Conscience is the mechanism that powers the oscillations of tension and release we experience during learning, growing, and loving.

A teacher from my early years as a disciple used to say that where there is disturbance the Holy Spirit is moving. The Holy Spirit uses the voice of conscience to awaken us to His will. Turmoil in the soul can become the birth pangs of new life. The Holy Spirit comes alongside us as a faithful companion and guide helping us to navigate the rhythms of tension and release essential for our development.

The experience of tension and release is illustrated by the biblical scene in Genesis one where God separates the light from darkness. When we experience tension we are in darkness, a state of lack. There is something we don’t know, don’t have, or don’t acknowledge. Once the light of truth breaks through, all is made clear and we are released into a new experience of life. Moving from tension to release, from lack to supply, is a pattern inherent in Creation.

Creation is animated by the breath of God. When we are alienated from God’s life, either through ignorance or disobedience, we naturally feel out of sorts. The Lord Jesus proclaimed, “Truly, truly, I say to you, unless you eat the flesh of the Son of Man and drink His blood, you have no life in yourselves. (John 6:53)” Ultimately life can only come from God. If we are not in harmony with the source of all life we are spiritually dead. We experience that deadness in the form of tension and disturbance. Breaking through to a new experience of the true, the good, and the beautiful we cannot but help feeling release and fulfillment. Union with God is our intended destiny. Rhythms of tension and release, of lack and supply, are the transformative experiences that enable us to realize that destiny.

Without disturbances we would never progress in life. Disturbances are uncomfortable, but avoiding them short-circuits our development. We may prefer a frictionless life, however, the only way to achieve that is to forfeit life. Death is the ultimate cessation of friction. If we want to live and grow, we are going to have to embrace the pattern of tension and release that inevitably comes from being creatures of Creation. This is especially true for a person moving from spiritual death to new life in Christ.

Dostoevsky’s story of Father Zossima’s transformation illustrates the tension and release process involved in a person’s journey towards reconciliation with God. All conversions bear this same signature in one way or another. It is hard to kick against the goads and the tension created from trying to live life against the grain of reality is used by God to provoke us to seek after Him.