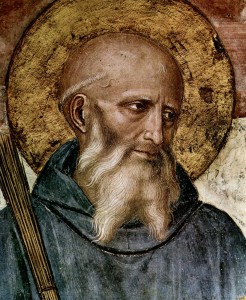 Saint Benedict Detail from a fresco by Fra Angelico

The blogosphere is teaming with posts and discussion about the Benedict Option, especially since the recent SCOTUS ruling on same-sex marriage. What exactly is the Benedict Option? Rod Dreher, the leading proponent of it explains:

“[The Benedict Option is] my name for an inchoate phenomenon in which Christians adopt a more consciously countercultural stance towards our post-Christian mainstream culture. The name comes from the final paragraph of Alasdair MacIntyre’s 1981 classic of moral philosophy, After Virtue, in which he described the state of contemporary moral discourse as irresolvably chaotic — irresolvably, because we have no common source of moral behavior anymore, and have decided, as a culture, that moral truth is something one arrives at by feeling.”

While the term might be new, the idea is very old. In fact, it harkens back to Saint Benedict who is considered one of the key founders of monasticism.

We have always considered our life together as sharing something in common with traditional monasticism. While many tend to have a simplistic, negative and often erroneous view of monasticism, a thoughtful study of it will reveal that monastic orders have been centers of Christian truth and ideals that have helped to preserve society. The Kingdom of God is a counter-cultural reality, initiated by Jesus and embodied by His Church. In a way, you might say that the Benedict Option is just another name for simply being the Church.

Not everyone is called to live in intentional community, but every Christian should be vitally part of Christian community in some form. I believe all this talk about the Benedict Option is really a call to Christians to be the Church. This is how we see it and why we live the way we do.

Here are some links about the Benedict Option:

Podcast links if you prefer to just listen: