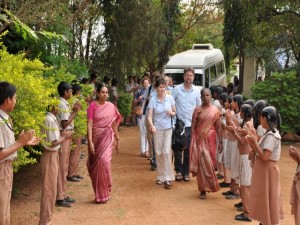 As our microbus left the hectic, crowded street and neared the gates of St. John’s Matriculation School; the varied sounds of hand clapping, drums and singing filled our ears.  The seven of us cast bewildering looks around, and in discordant voices asked one other, “What’s going on?” and other similar queries.  Our microbus lurched to a halt just inside the gates of the school and we all filed out the side door.  A lady in a red sari bid us to follow her, and soon all our questions were answered.  Lining the path into the school grounds, eight hundred students of all ages had come out to greet us with fanfare, song, bouquets of flowers and gifts.  Needless to say, we were all somewhat flabbergasted with the attention showered on us by the staff and students of the school.  After some introductions, Shanti- the lady in the red sari and the Principal of the school- ushered us into her office so we could plan the day’s activities.  So began our whirlwind ministry in southern India.  How did we get here?

For the last couple of years, our Fellowship has prayed and sought for opportunities in which we could be of help and service in other areas of the world.  Last year we were able to bring a van load of wheel chairs to an orphanage in Mexico.   As we sought God about what we could do this year, St. John’s Matriculation School came to our attention.   Awhile back we had learned about the work of Dr. Thirumalai and St. John’s school through Alec Brooks and Charis International.  At that time we heard of Dr. Thirumalai’s desire to set up a sewing school at St. John’s and we gave towards that project.  Late last fall we learned that Dr. Thirumalai has been wanting a team to come to the school and teach conversational English, basic computer and possibly help out with some new construction.  After much prayer and conference, we decided to send five of us from the Fellowship to meet up with Alec and Joni Brooks in Delhi, India. From there we would proceed to Tenkasi where the school is located. 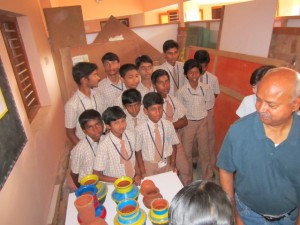 St. John’s Matriculation School began as the vision of Dr. Madasamy Thirumalai and his wife Swarna.  Their desire was to see a school established that could provide an education for those too poor to afford what was currently offered at the average school in India.   Sixteen years ago, the school began in some rented rooms in downtown Tenkasi- the town where Dr. Thirumalai grew up. The school first served Lower Kindergarten and Kindergarten students. Over the years, through Dr. Thirumalai’s and Swarna’s, perseverance and hard work as well as the Lord’s provision- the school has expanded to provide schooling for all the elementary grade levels as well as the first couple of upper level grades- up to 10th standard. The school is now on its own property (through the sacrificial giving of Dr. Thirumalai and his wife and others), has three buildings housing the classrooms for 850 students and employs approximately 20 teachers. The students are all receiving an excellent education in math, history, reading, Tamil, science, social studies and English. Students also receive training in living a disciplined life, relating respectfully to others and how to work diligently and with excellence. For a majority of the students, none of this would be possible if it were not for the low tuition at which the schooling is offered. I learned that as well as providing a very good education for far below the average rate in India- 250 students are receiving scholarships which allows them to attend even though their families could not afford the tuition. 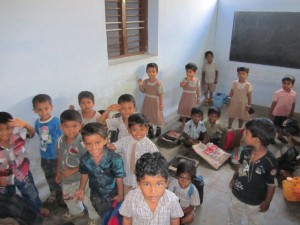 On a typical day our team broke up in teams of two and cover three classes in the morning. Matthew and I worked with the computer classes, Tim and Jordan conversational English, and Betty and Joni would teach English songs. The caliber of the students we taught thoroughly impressed us. They had an enthusiasm for learning, were always excited and ready to get to work. Their respect, discipline and warmth towards one another and us will always be remembered. I had to remind myself that the majority of these students came from some of the poorest situations in Tenkasi. Their behavior never let on that this was so. These children were flourishing at St. John’s school. That is what we saw- children flourishing in the love of God that has come to them through the dedication and care that began with Dr. Thirumalai and Swarna sixteen years ago.